The first step was to create a shader that drew a water texture with a transparency mask. This was pretty simple. Basically, I drew my level’s water on a separate layer in Photoshop, saved it as a separate image, and used that image as input for my shader. You can see what I mean below.

Water drawn on a plane

The same water plane with a transparency mask

Next, I modified my shader to use a bump map. This was also a pretty easy step. You can use some of Unity’s built in shaders as a reference, or check out this tutorial I used long ago. Ignore the fact that my shader has two slots for normal maps – we’ll get to that later.

The next step would be to implement some sort of flow map editor. Flow maps can either be implemented as textures, or as I recently discovered, as mesh vertex colors. My semi-functional XNA solution used a texture, but in Unity, I opted to go with vertex colors. My original XNA solution, and subsequently my Unity solution were both based off of the ideas presented in this fantastic article. It’s a great read, so if you want some more information, definitely give it a look.

The underlying concept itself is fairly simple. The vertex painter itself ended up being pretty difficult to pull off. I tried using an existing vertex painter on the asset store as an example (back when it was free), but my Lord it has a lot of issues. Creating a custom editor tool and creating a good custom editor tool are two very different things. Anyway, you can see the fruits of my labor below. 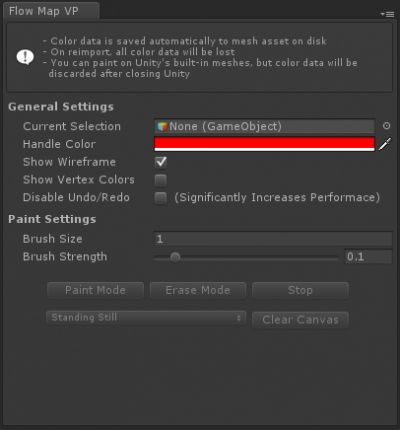 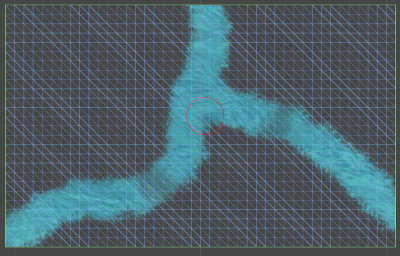 Painting in progress. You can optionally toggle the wireframe on/off. 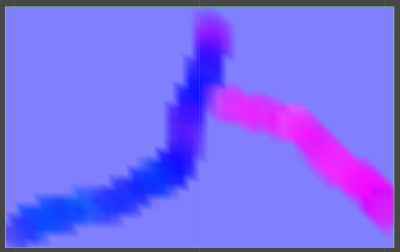 A Plane with More Vertices

A default plane really doesn’t have very many vertices. If you want to make your flow map more precise, you need to create a mesh with more verts. Luckily, a tool exists on the Unity community wiki to do just that. 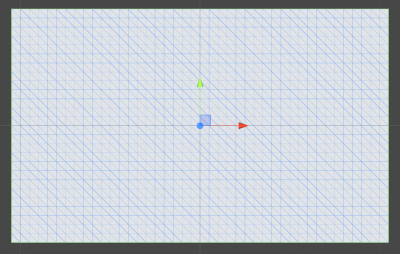 The last piece of the puzzle was to account for uneven skewing of our bump map. Normally, a bump map will be scrolled at an even speed across its mesh. In our case however, we scroll different sections of our bump map at different speeds (because we want portions of our water to move faster than others). This isn’t a big deal over a short period of time, but if we let the effect go on long enough, it becomes extremely obvious. 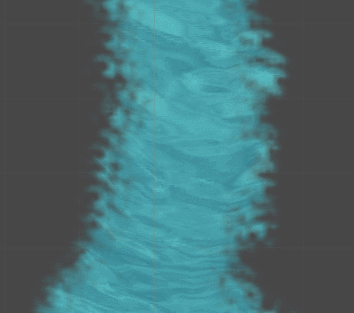 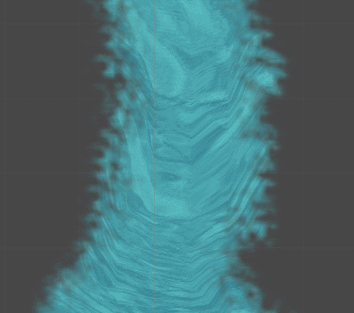 The solution is to use two bump map textures, and fade them both in and out over time, opposite of each other. When one image is fully opaque, the other is fully transparent. At the moment when one of our bump maps is fully transparent, we can reset it’s offset back to zero, allowing us to start over. The effect can be visualized below.

View of a single bump map, fading in and out

For a final touch, I added support for a ripple height map. Water ripples can be caused by rain or objects moving through the water. For this feature to work, you’ll need Unity pro (because it uses a RenderTexture). Here’s how it works: 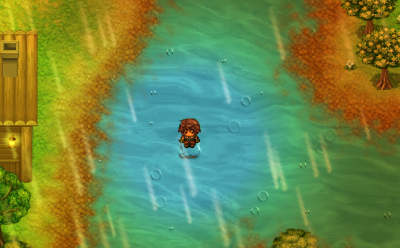 That about wraps everything up. Overall, I’d have to say the hardest part was creating a decent vertex painter. There’s quite a few things to consider when you want to create a high quality custom editor in Unity. But now that I’ve gone through it once, it shouldn’t be so bad next time. In fact, I even created a generic vertex painter tool while I was at it.

Despite the fairly in depth write-up, I’m still debating whether or not to release all of the code for free. I may put it up on the Unity store for a few dollars. We’ll see. Anyway, I hope it was informative. Here’s a quick video demonstrating the end effect. Notice how the river splits and flows both southwest and southeast, all on the same plane. In this video, the raindrops are a little hard to see on the water, sorry about that.