A while back I did a write-up on my FontBuilder project, which made mention of a tool I created for extracting font kerning data from font files. Although I’ve since moved from XNA to Unity, and this tool is no longer required, I still wanted to record all of my notes, and document what I’ve created, just in case it ever has some use in the future. 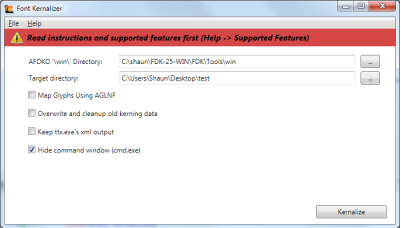 In addition, I wanted to note that if you’re ever wanting to do something fancy with fonts in a game, I recommend using a tool like Freetype. Freetype is an open source software font engine for producing glyph images. In other words, it does roughly what I was trying to accomplish with my FontBuilder project in the first place, and automatically takes care of things like kerning. There are several reasons why I didn’t use it in the first place, although I wish I would have:

As mentioned above, the basic goal of my font kerning project, aptly named the “FontKernalizer”, was to extract horizontal kerning data from font files of various formats, and save it in an organized, easily usable format. Basically, I wanted to be able to do this:

As I quickly discovered, fonts are complex. Really complex. Before we really get into my FontKernalizer and how it works, I should give you a brief overview of the various font formats, and how they work (or don’t work) in XNA.

TrueType vs PostScript Type 1 vs OpenType

Whew, that’s a lot of information. In part 2, I show you my actual solution, and show you the tools I used to get the job done.