In Part 1 of this series, I gave a brief overview of the various font formats, kerning data, and how they are handled in XNA. In Part 2, I’d like to talk about my solution, and what was required to make it work.

To reiterate from my previous post, the basic goal of my font kerning project was to extract horizontal kerning data from font files of various formats, and save it in an organized, easily usable format.

The first step was to get my hands on a tool that could extract the raw data from a font file. It took a surprising amount of digging, but I finally stumbled across a program called “ttx.cmd”, which is a simple command line program contained within the Adobe Font Developer Kit for Open Type (AFDKO). This tool dumps out a raw xml file with all kinds of kerning and style data. You can see from the screenshot below that my tool requires the AFDKO to be installed on your machine. 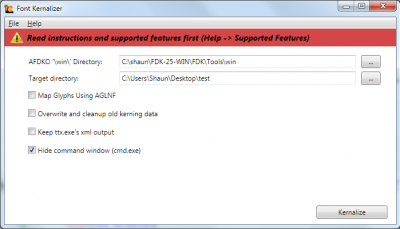 The next step was making sense of the output, and converting it into a format that could be easily consumed from within XNA. This was the tricky part. In order to explain this fully, you’ll need some basic background on how kerning values are stored within font files.

How Kerning Values are Stored:

How to Extract the KERN or GPOS Table:

How to Read the GPOS Table:

Putting it all together

Once I understood how to read the data dump, I was able to parse the xml and massage the data into a more usable format. After that, the final piece of the puzzle was to convert the Adobe glyph name to both a windows character number and a unicode value. This was done using the Adobe Font Glyphs Chart. Note that there are two charts – an older one and a newer one. The FontKernalizer program supports both.

Tooltip for choosing which ‘mapping chart’ to use

It was a long journey, but I was finally able to create an xml file that looked something like this:

The classes were stored later in the file, and looked something like this: 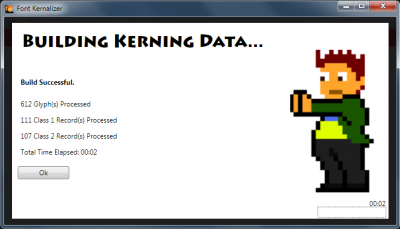 Success! I serialized the entire thing as xml, and was easily able to load it up within my XNA project. All I had to do in XNA was draw each character one at a time, and check the surrounding characters to see if an adjustment needed to be made. Awesome.

Although the FontKernalizer accomplished what I needed it to, there were still a lot of unsupported features: 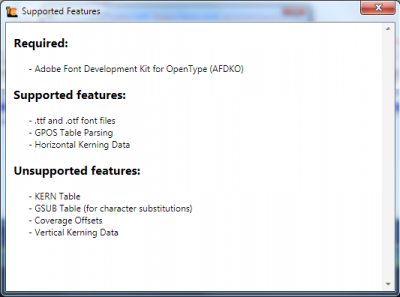 Reading that list leaves me feeling bittersweet. Ultimately, the FontKernalizer was only a partial success. I certainly learned a lot, but if I could do everything over again, I would have put some more effort into researching a tool like FreeType. Fonts are a complex beast. Don’t make the mistake I did and assume something that sounds simple, like retrieving a font’s kerning data, will truly be an easy task.