The Awesomeness of AngularJS and Firebase
July 15, 2015  by  shaun

I actually wrote my first AngularJS app a few months ago, back in February. However, despite the long delay, I wanted to do a proper writeup describing my experience – mostly because it was a lot of fun!

Below is a screenshot and link to the demo site I created. It was a proof of concept for a simple consulting site, complete with real-time charts and graphs. If you open up the website in two windows, and change some data, both windows will automatically update – the graphs and charts will animate the change. Awesome! The code can be found on my bitbucket account.

END_OF_DOCUMENT_TOKEN_TO_BE_REPLACED

So I finally decided to take the plunge and start learning about hosting in the cloud. In the four years that I was out of the programming game, this has to be one of the areas that has seen the most rapid change and development. What was just starting to take off back in 2010 has now become a virtual necessity for most programmers, and is one of the most important things for me to catch up on. Seeing as most of my recent experience was in a .NET environment, I decided to get my feet wet with Azure.

It’s been quite a while since I’ve done any real web development, so it took me a few days to get up to speed with ASP.NET MVC 5, EF 6, and Azure, but after a weekend of tutorials and experimentation, I was up and running. The screenshot below is what I managed to create – a simple recipe website my mom has been wanting for years. Sadly, it’s far from finished, and is more of a quick demo to get me familiar with Azure. I doubt it will see true completion any time in the near future. Sorry mom! 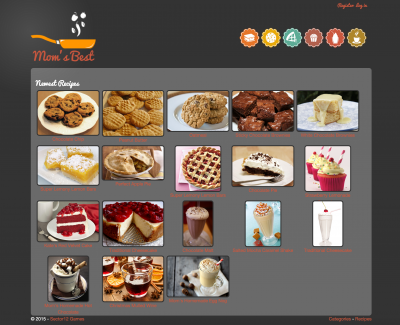 Mom’s Best, a simple recipe website for my mom (no longer live)

I plan on leaving the site up indefinitely, or until Microsoft decides I can no longer host it for free. The code can be found here, on my bitbucket account. To wrap up this post, I’d like to give you a few of my first impressions of Azure, mostly pertaining to simple website development.

END_OF_DOCUMENT_TOKEN_TO_BE_REPLACED

I’ve given the shadow system some much needed love, so I figured I’d throw up a quick demo. It looks considerably better than the previous version. Here’s what changed:

I’ve been working on a simple platformer for the past week or so, and wanted to get a quick demo up. It’s certainly not feature complete, but the first two levels are playable. It’s meant to be a sort of cutesy game, for kids. Check it out!

END_OF_DOCUMENT_TOKEN_TO_BE_REPLACED

I’ve got a basic demo up and running now, so I’d like to share. There’s a lot of work left to do, but it’s coming along!